Read our excellent reviews on 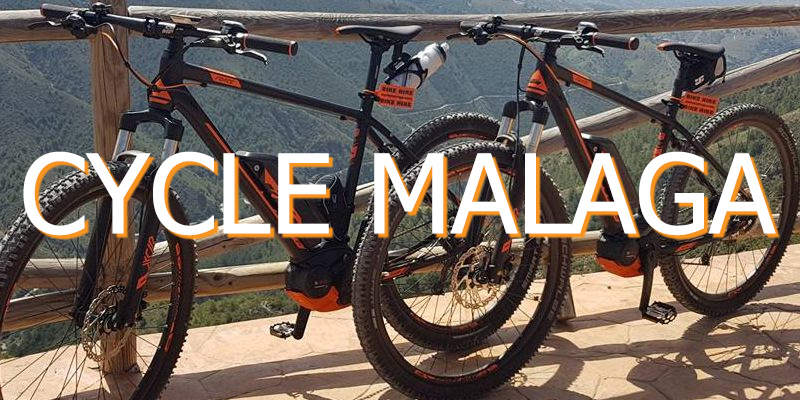 Below you will find articles that have featured Finca el Cerrillo in newspapers and magazines.

I am not sure that potent wine is the most advisable refreshment after a hot afternoon's hike in the hills, but it was certainly going down well among our group of walkers.

After crisscrossing mountain streams and following paths flanked by lemon trees, we had huffed and puffed our way uphill (okay, up a slight incline), and all nodded enthusiastically when Andrew Paterson, our guide, suggested popping into his mate Pepe's farm for a glass or two of Moscatel. 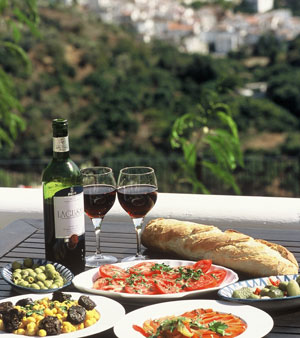 I suppose it's whom you know rather than what you know even in the middle of the Andalucian countryside, as after a shout from Andrew, Pepe cheerfully abandoned his goats, invited us in and poured out tumblers of dark-golden wine from an old Pepsi bottle.

It tasted like grape juice, and I was on to my third glass before Pepe informed us it was 18 per cent proof. "That's not strong," he chuckled "My friend makes one that's 25 per cent." Let's just say that everyone was in a very jolly mood for the rest of the afternoon, and our walking poles came in very handy as we renegotiated those streams on the way back. I was in the Axarquía, a rural area an hour's drive east of Malaga, rising up behind the lesser-known eastern stretch of the Costa del Sol and bounded to the north by the Tejeda and Almijara mountain ranges. Although pockets have long-standing expat communities - Danish, German and Dutch, as well as British - most of the area is wild and untouristy, considering how close it is to Malaga and the coast.

The area was originally settled by the Phoenicians, followed by the Romans and Arabs, whose influence is still discernible today in the tiny villages hidden in the valleys, invisible until you are nearly upon them. Olive trees produce coveted oil, while avocados drip from the trees, along with custard apples, medlars, peaches and mangos, the crops varying with the altitude. Unique to the area are the rectangular plots alongside the vineyards on the hillside, which are used to dry the Moscatel grapes in the sunshine before they are turned into the sweet wines for which the Axarquía is renowned. Although we would call them dessert wines, in Malaga they often drink them as an aperitif, rather like a sherry.

We were staying in the Finca el Cerrillo, a romantic boutique hotel outside the village of Canillas de Albaida, with views down the valley. A former olive mill dating back 200 years, it has been transformed by Sue and Gordon Kind into a stylish yet unfussy haven. I have stayed in dozens of rural hotels in Spain, but this is one of my favourites. Gordon is an artist who has used his creative skills to create original designs in both the hotel and the garden. It is somewhere you feel the stress seeping away the moment you arrive.

After a morning flight, we arrived in time for lunch on the terrace, then set off down a wiggly track which for centuries was used by muleteers taking the silk made in the area to Granada. As the hillsides are so steep, mules are still used to work the land and most of the crops are picked by hand, just as the Moors used to do until they were expelled at the end of the 15th century. Our walks over the next few days took us along paths covered in highly aromatic Mediterranean varieties of lavender, thyme and rosemary, with rows of poppies marking our route around the hillsides, and the peaks of the Sierra Almijara in the distance.

Walking downhill through almond and orange groves, we stopped on a Roman bridge outside Salares, one of the prettiest villages in the Axarquía, and which has only about 200 inhabitants.

"Salares was founded by the Romans," said Andrew, "who used to extract salt from reserves nearby, which is where the name comes from." Walking through a labyrinth of lanes fortunately far too narrow for cars, we came to the parish church. "Although the Christian settlers turned the mosques into churches, the brick bell towers, with their geometric tracery, still look like minarets. This is one of the best-preserved in the area, and dates back to the 13th century," said Andrew.

Back at the Finca el Cerrillo, Christine, the chef, was busy cooking slices of the local spicy black pudding with molasses from the village of Frigiliana, only a few miles but dozens of hairpin bends away. Out on the terrace, Sue poured us glasses of chilled Jarel, a more sophisticated Moscatel from the Almijara winery outside the village of Cómpeta across the valley. We all jumped into the pool and floated around to relax our tired muscles, with nothing but birdsong to disturb the perfect evening.

The Observer written by Richard Eilers

An English couple dream of a new life in Spain, fall in love with a rundown finca, tangle with the red tape, battle with the builders' manana attitude and finally open their charming hotel. Yada, yada, yada ... haven't you heard it all before?

But, at the risk of sounding like Amanda Lamb from A Place in the Sun, you have to be glad some people make the effort: tears and tantrums for them means a fantastic place to stay for the rest of us.

Sue and Gordon spent two years creating Finca Cerrillo out of a decrepit former olive oil press. It's an hour north east of Malaga, perched on a hill, still surrounded by slopes sunning olives just waiting to be picked and pressed. 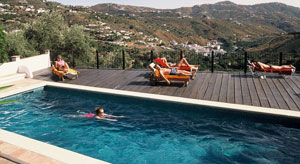 No chance of that now: 10 simple bedrooms have been created in the old factory. One glorious room, tucked into the hill, has its bathroom, where newly pressed oil was once stored, carved out of the bare rock.

The dining room is all heavy woods and light walls. I was intrigued by a wooden sled studded with shards of quartz, like some primitive wakeboard; it turns out it would have been pulled across the stone threshing circles that dot the surrounding hills.

If you can summon up the energy to drag yourself away from the pool, with its stunning views down the valley, a 10-minute walk down the hill, across a tiny Roman bridge and up again takes you to the nearest village. An hour or two's walk will take you through some beautiful scenery.

It's no surprise, then, that the finca specialises in walking holidays, but there are also painting holidays, scriptwriting courses run by a 'Corrie' writer and DIY sit in the sun breaks for the lazy. There's also an air-conditioned studio perfect for any yoga teachers who wanted to run a course in the sun for their favourite students. You eat on the terrace most of the time, a stunning setting for food that is at its best when simple - platters of cheese, olives, ham etc. When dinner isn't offered, the village has very acceptable alternatives.